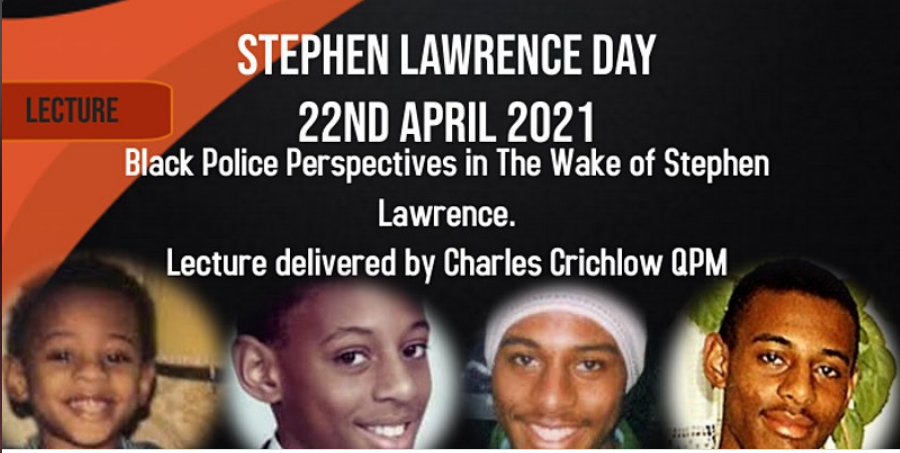 Who is Stephen Lawrence?
18-year-old Stephen Lawrence was stabbed to death in an unprovoked attack by a gang of white youths as he waited at a bus stop in Eltham, south-east London, with his friend Duwayne Brooks on April 22nd 1993.

Why was Stephen murdered?
Stephen Lawrence was murdered because he was black.

Why is Stephen so important to modern day Policing?
In the aftermath of the murder and the Lawrence family’s search for justice, Dr Neville Lawrence, said that his son’s murder “opened the country’s eyes” to racism. This led to the emergence of ‘Black Police Perspectives’ in the wake of Stephen’s murder.

Why do we remember Stephen’s life on April 22nd?
Stephens Mother, Baroness Doreen Lawrence, Stephens father Dr Neville Lawrence, Stephens brother Stuart Lawrence continue to fight and campaign for justice for Stephen and to keep his memory alive.
The lecture will give insight and the perspective of a Black Officer, on how the Stephen Lawrence murder, investigation and enquiry impacted continues to impact modern day Policing.

Charles Crichlow QPM
Charles Crichlow served in Greater Manchester Police between 1990 and 2020. He was one of the founding members of BAPA in the wake of the Stephen Lawrence Inquiry Report Publication in 1999.
He went on to be elected President of the National Black Police Association and was the author of the NBPA Stephen Lawrence ten-year anniversary review in 2009. Charles is a graduate of the University of Manchester School of Law where he completed his Masters in Criminology.
On his retirement in 2020 he was awarded the Queens Police Medal for services to policing. After a year of reflection in lock-down Charles is now lecturing in Criminology at University of East London, one of the most ethnically diverse universities in the UK.