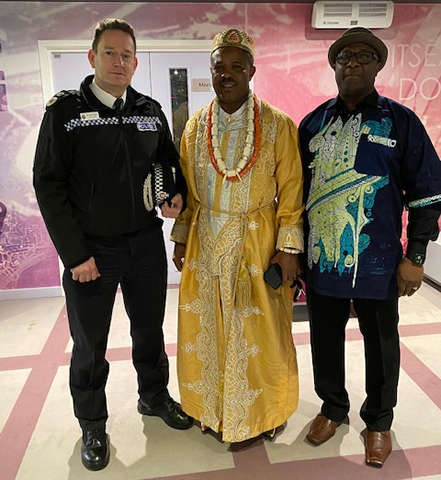 The Chief Constable of Essex Police B.J Harrington and the Vice president of the NBPA Macdonald Neife attended the end of year Celebration held by the Nzuko Ndi Igbo Basildon.

The group is made of individuals from the Eastern part of Nigeria living in Basildon and beyond.

The event was hosted by the Chairman Dr Chuks Upkaka and was attended by Former Mayor of Enfield and also former Mayor of Brent including other dignitaries.

The Chief Constable gave his support and his pledge to build the trust between the police and the different diverse communities in Essex.

The Vice President said that the presence of the chief Constable is testimony of his person in trying to improve diversity fairness, equality and inclusiveness within Essex police and the local community.

He was presented with an Igbo Isi Agu attire which is an honour in Igbo culture for his contribution and support towards promoting race relations.