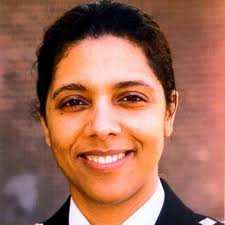 The Karin Mulligan Scholarship was launched at the NBPA 2010 conference in Sheffield. The scheme is open to all levels members of local BPAs affiliated to the National Black Police Association. It is also open to of the NBPA and younger people associated to local BPA’s though participation in local activities.

Karin Mulligan one of Britain’s most senior black police women died in March 2009 after losing her battle with cancer. Karin was an exemplary police officer who challenged injustice and discrimination wherever she found it, she earned and deserved the respect and admiration of many, especially the NBPA.

Karin was a ‘pioneer’ for “Black” women in the police; she died just minutes after being presented with a ‘Policing Excellence Award’ from the National Black Police Association. Karin supported and guided many, it is in tribute to these endeavours that the NBPA have established a scholarship scheme in her name, “the Karin Mulligan scholarship scheme”.

The scheme will operate through the NBPA charity and will contribute to the development of members of the community, police officers and police staff completing academic study or personal development linked to policing.

Applicants will receive a maximum sum of £1000.Applicants must detail the development or study that they wish to undertake.

Applications will be considered twice per year for announcements in March and September. To apply for the scheme please click the link below to download the attached form for guidance and information.

Below are some of the successful applicants since the inception of the Scholarship Scheme.